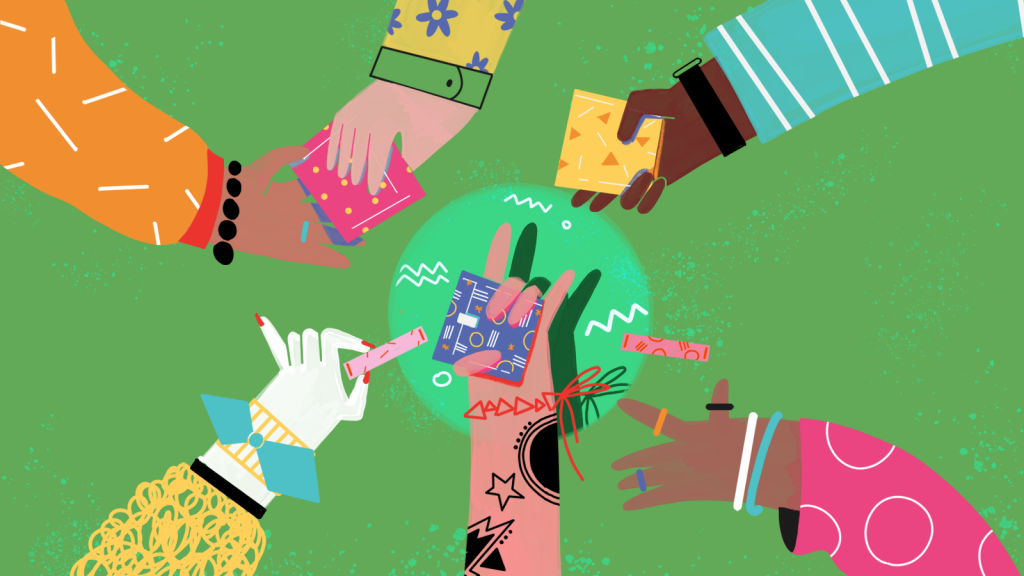 Facebook’s in-house creative strategy team, Creative Shop, asked us to produce a 15 second animation for ActionAid’s Period Poverty campaign. The animation needed to highlight the global sharing culture around sanitary products and drive donations to the charity. Creative Shop’s storyboard showed many hands passing tampons and pads to one another; we always help each other, can we help the Cox’s Bazar refugees?

We worked with our designer friends Hend Esmat and Lamiaa Diab, they brought the female characters and many hands to life. We are BIG fans of their sanitary packaging patterns! The overall style needed to reach men and women, so we kept the characters contemporary, dynamic and super colourful.

The project was animated by our talented frame by frame team. This traditional form of animation has a beautiful flow and human feel to it, we really wanted to work this way to keep the aesthetic in line with the sentiment of the campaign. Our animators digitally hand drew each frame which was then cleaned up and coloured, ready to be edited into the full story.

Along with 15 seconds of animation with the alternate endings, we also delivered a full package of social and web assets to help drive donations. We reformatted artwork to be used across a Facebook carousel, Twitter and FB banners, Instagram stories and also some assets to make ActionAid’s Period Poverty webpages fully align with the campaign.

We turned the animation and a complete social tool kit around in just under three weeks. We were super pleased that both Facebook and ActionAid were over the moon with the quality and management of the project, we loved it too!

The campaign was due to run for a month during and after Menstrual Hygiene Day (28 May) but was so successful that it ran for a further five months, both on Facebook and Instagram platforms. ActionAid UK also signed on more regular givers in the first week than it usually would in the entire month of December.

I can hand on heart say that I have never seen such thoughtful, beautiful creative in my group of charities before and that is testament to you and your teams. Thank you again for jumping on so many calls, taking feedback so easily and caring for the project.

Thank you so much for working so quickly and efficiently to make this beautiful piece. Well done again to everyone involved in getting this idea made and across the line within a very short timeline. I’m excited to get this project live and see the impact it drives.

The animations are beautiful and so well crafted. Thanks for adding your magic to this important campaign.