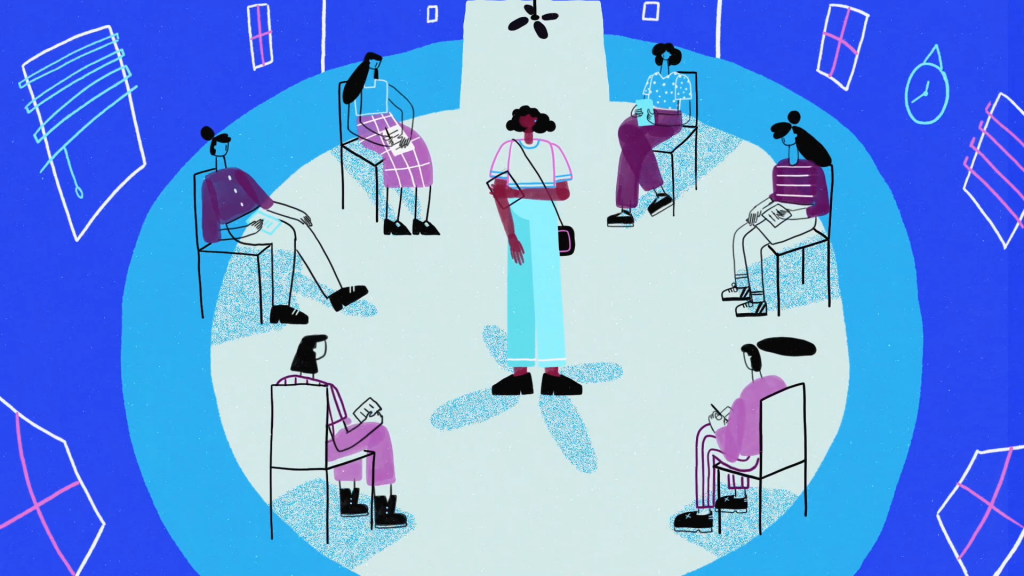 We were over the moon to work with Somerset and Avon Rape and Sexual Abuse Support again. For this project, SARSAS asked us to produce two films and three gifs.

The ‘group work’ film brief was to design appealing and relatable female characters to take the viewer from what they think group counselling sessions are, to how they can actually make you feel; listened to, believed and supported.

The second film was to inspire and thank the charity’s  fundraisers, along with a toolkit of gifs to promote grounding techniques.

Designed and animated by our super talented friends Hend Esmat and Lamiaa Diab, proudly produced by an all female Rumpus team.

We worked with SARSAS to ensure the objectives for each film were coming through each of the scripts. We took the final scripts into a storyboard and an animatic, once approved we worked with the wonderful Katy Maw to get the voice record spot on.

Using the SARSAS brand guidelines Hend and Lamiaa brought the characters to life, experimenting with female forms and colours.

The set of characters for the fundraising film were super fun, our favourites include the hiker with the hairy jumper and tobogganing bean bath guy.

For each film, we selected fully licensed music with an all female vocal and got the tone just right for the messaging.

The final ‘group work’ film was selected for a Public Choice Award in the 2020 British Animation Awards, which we are very proud about.

Thanks for all of your work on this project Rumpus – fabulous as always and here’s hoping we have more collaborative opportunities.